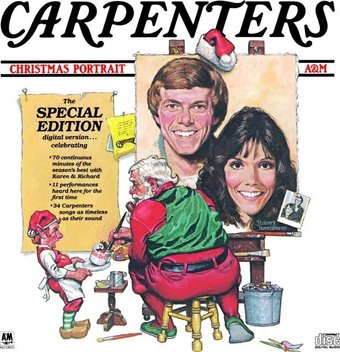 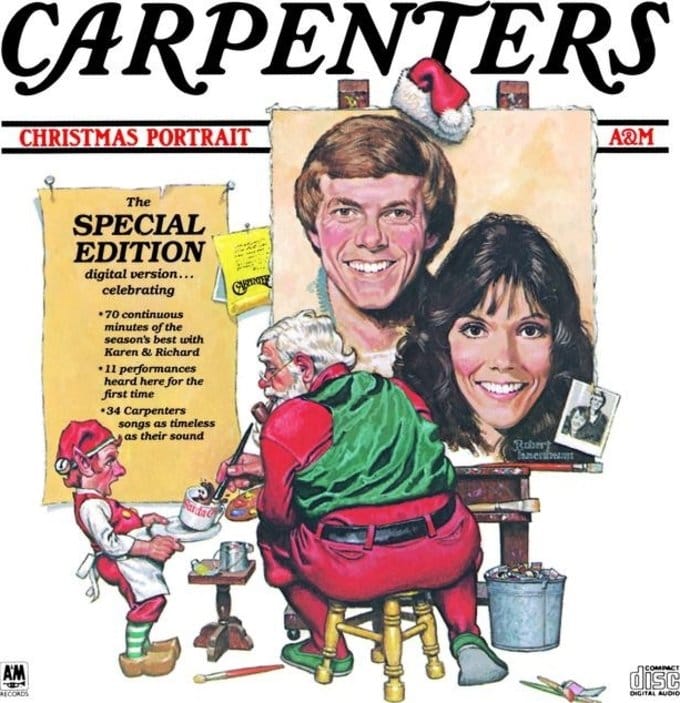 The Carpenters: Karen Carpenter (vocals); Richard Carpenter (keyboards).
Additional personnel includes: Bob Messenger (tenor saxophone); Pete Morgan (acoustic bass); Joe Osborn (electric bass); Ron Tutt, Barry Morgan, Cubby O'Brien (drums).
The Carpenters were just about the last adult pop outfit of their era with anything resembling rock credibility (they did have a little of the latter in the early days, and weren't a kid act like the Osmonds) who could have pulled off a straight Christmas album. And they did it in superb style here, illuminated throughout by the delightful, complex, often playful arrangements, courtesy of Peter Knight, Richard Carpenter, and Billy May. Actually, for a change on a Carpenters album, Richard is the dominant personality on display across this record, as both co-arranger and producer, as well as the mastermind behind the project; Karen Carpenter's voice is also prominent, to be sure, most notably on "Merry Christmas, Darling" and "Have Yourself a Merry Little Christmas," and she threw herself into this next-to-last completed project (and their final release before a two-year hiatus), but it's Richard who comes to the fore everywhere here, in ways that are impossible to ignore. And the results are mightily impressive, as the mood never slackens in what amounts to a wall-to-wall celebration of the Christmas holiday. After a suitably festive introductory section, Karen Carpenter's solo voice comes up on the "Christmas Waltz" and the proceedings really take off, carrying us into the most engaging rendition of Leroy Anderson's "Sleigh Ride" that has come down in many a year, and it only gets better from there, through a brace of holiday staples that end up sounding fresh in her voice and his arrangements. There's not a slack moment on this album. ~ Bruce Eder

18%off
Amy Grant
Home For Christmas
$9
Add to Cart

Alvin & the Chipmunks
Christmas With The Chipmunks, Volume 1 (CD)
$13.60
Add to Cart