A bittersweet story of sisters embracing love in a time of war. 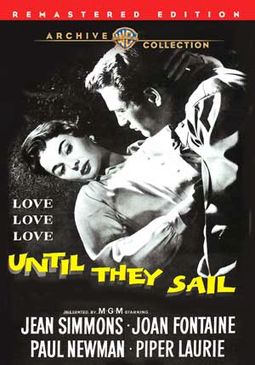 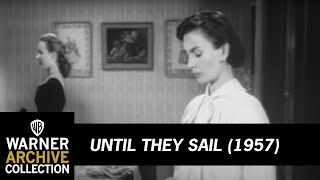 UNTIL THEY SAIL (Original Theatrical Trailer)

The men of New Zealand march off to war, leaving behind cities and villages filled with women and loneliness. In time, new men come ashore: U.S. Marines facing uncertain futures in Pacific battles yet to come. And new loves -- tender or tragic, transitory or lasting -- begin to flower.

A constellation of stars shines in a bittersweet James A. Michener story of sisters (Jean Simmons, Joan Fontaine, Piper Laurie and Sandra Dee) embracing love in a time of war, but it's the sensitive romance between a war widow (Simmons) and a jaded captain (Paul Newman, establishing his credentials as a screen heartthrob) that forms the tale's poignant heart. Under the sensitive direction of Robert Wise (who directed Newman the year before in his breakthrough Somebody Up There Likes Me), the memories of a lifetime are formed Until They Sail.

Based on a James Michener story, UNTIL THEY SAIL tells the romantic story of four New Zealand sisters during World War II and their involvement with American soldiers. Sisters Barbara (Jean Simmons), Anne (Joan Fontaine), Delia (Piper Laurie), and Evelyn (Sandra Dee in her first movie) are lonely for male companionship. Their father and brother are killed, as is Barbara's husband, while Delia's husband, Shiner (Wally Cassell), is a prisoner of war. Each sister finds herself soon involved with an American soldier--with Delia involved with more than one. Anne, a spinster who has kept love at arm's length--finds herself in love with U.S. Marine officer Captain Richard Bates (Charles Drake), but when she becomes pregnant, he is killed before they can be married. In this tragic aftermath, Barbara and another captain, Jack Harding (Paul Newman), engage in a platonic love affair, dictated by Jack's hardened outlook on life and love. To further complicate matters, Delia asks Shiner for a divorce, a decision that results in a catastrophic event that changes all of their lives forever. Director Robert Wise's streamlined directing style, founded on his training and expertise as an editor on suchfilms as CITIZEN KANE, is in full swing in this taut, dramatic war picture.

Four sisters in New Zealand deal with the absence of their men during World War II by becoming involved in liaisons with the American GIs stationed near their home. The film takes a straightforward look at the dislocations of war and the way it effects the choices people make with their lives.

Family Interaction | Mystery | Thriller | Murder | Theatrical Release
This product is made-on-demand by the manufacturer using DVD-R recordable media. Almost all DVD players can play DVD-Rs (except for some older models made before 2000) - please consult your owner's manual for formats compatible with your player. These DVD-Rs may not play on all computers or DVD player/recorders. To address this, the manufacturer recommends viewing this product on a DVD player that does not have recording capability.

Since You Went Away
$19
Add to Cart

A Summer Place
$19
Add to Cart