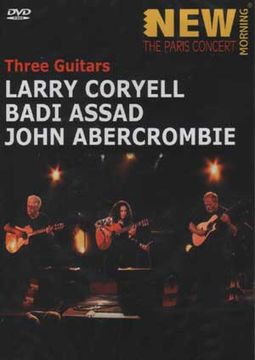 Get email alerts for Larry Coryell
Currently Out of Stock: We'll get more as soon as possible
Notify Me When Available
Add to Wishlist
Format:  DVD
item number:  XTXB 06249D
91% recommend us!

Hailed as "the most inventive guitarist since Charlie Christian", Larry Coryell is not only a hero, but a living legend of the guitar. This is a fully and utterly deserved epithet for this "godfather" of fusion, a creator of subtle soundscapes and of riffs delivered at the speed of light that qualify as jewels of musical distinction! As he demonstrates once again in the framework of Three Guitars with Badi Assad and John Abercrombie, two of the sharpest guitarists on the circuit who joined him on the stage of the New Morning in 2004, Larry is one of the most engaging personalities of the jazz scene today - even if, like his late friend Frank Zappa, he is profoundly suspicious of compliments. His standard response to words of praise is "Shut up and play!". So why don't we shut up and listen to Three Guitars... (Daniel Farhi)

Widely credited as the godfather of the jazz fusion movement that gained prominence in the 1960s and 70s, Larry Coryell is a guitar master whose skills and legacy are the stuff of legend. His virtuosity has been showcased in many contexts, notably with his band, Eleventh House, and later playing on Charles Mingus's TWO OR THREE SHADES OF BLUE. Here, Coryell joins forces with two other formidable musicians, Brazilian guitarist and singer Badi Assad, and the great American jazz guitarist John Abercrombie. In a show that was part of Paris's New Morning Festival in 2004, the Americans play a rare acoustic set, flavored with Latin tunes ("Seu Jerge E Dona Icam," "Insensatez") and a cover of "Ralph's Piano Waltz."

40%off
Larry Coryell
Live at the Jazz Workshop
$14.98 Super Savings
Add to Cart