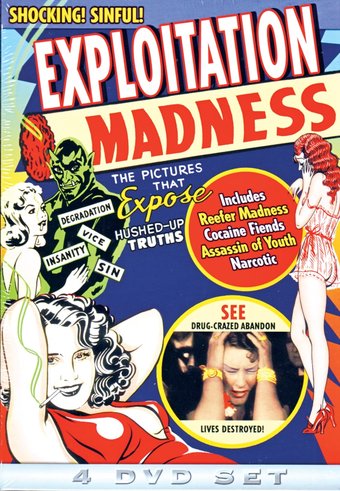 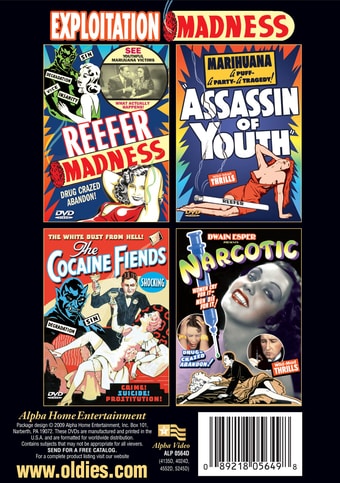 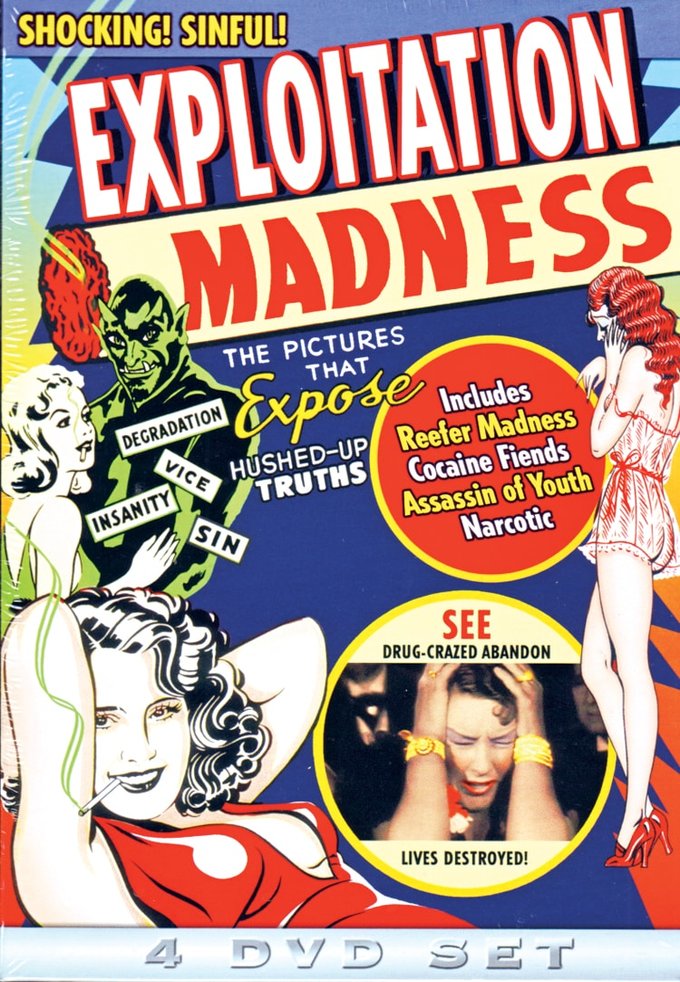 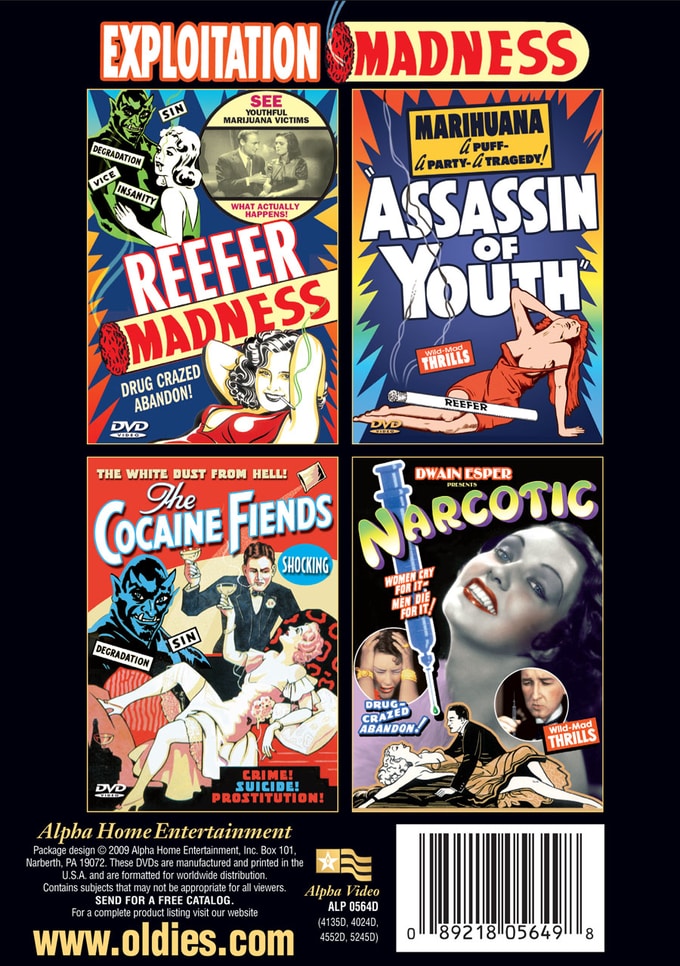 This shocking release for fans of classic exploitation cinema offers a collection of tawdry releases created to both exploit and frighten members of the American drug culture, like REEFER MADNESS, COCAINE FIENDS, ASSASSIN OF YOUTH and NARCOTIC.

REEFER MADNESS (1937): The evils of marijuana addiction are "chillingly detailed" in this cult classic, which is narrated by a high school principle who declares, "Something must be done to wipe out this ghastly menace!" A case study of all-American high school kids Bill and Mary highlights the danger of marijuana use when the teens change from tennis-playing, iced tea-drinkers to fiendish, promiscuous, dope addicts after sampling one joint. Naturally, the marijuana users in the film play the piano, dance, and laugh uncontrollably - all surefire signs of "devil weed" use. Bill hallucinates and faints one fateful evening as Mary is accidentally shot; then, more deaths occur before the inevitable mental institution scenes which serve to underscore the horrors of smoking reefer.

THE COCAINE FIENDS (1935): Senses Drowned In Forbidden Pleasures... Sordid and sensational, The Cocaine Fiends is a vintage melodrama that depicts the narcotic's addictive dangers and its rampant threat to society. When pretty country girl Jane Bradford (Lois January) meets drug peddler Nick (Noel Madison), she falls for his smooth line about marriage and the promise of unlimited riches awaiting them in the city. He also introduces her to his special "headache powder" that leaves Jane feeling instantly exhilarated. Arriving in the big city, she is soon transformed into Nick's strung-out, coke-addled moll (calling herself "Lil" to hide her shame) whom he discards without remorse. Her brother, Eddie, moves to the city in an attempt to locate Jane. When a beautiful carhop shows him the wonders of the miracle drug, it's not long before Eddie and his girlfriend spiral downward into hopeless depraved squalor and tragedy. Also released under the title The Pace That Kills, The Cocaine Fiends, like its famous cult sister Reefer Madness (1938), is unintentionally hilarious in its frank, uncompromising look at dope's countless evils, dramatically reinforced by the film's shady locales - not least of which is the gangster hangout the Dead Rat Cafe - replete with a stark, rodent-wallpapered decor!

ASSASSIN OF YOUTH (1937): A young reporter on his first assignment goes undercover to investigate the granddaughter of a wealthy woman killed in a drug-related car crash. The girl, Joan Barrie, stands to inherit her grandmother's fortune, contingent on Joan's good behavior. Linda Clayton is a drug-dealing, double-crossing cousin who plots to ruin Joan's reputation and take all the money. While the newspaper aims to expose the evils of the murderous "marijuana menace," scandal erupts as the town is turned upside-down with all-night drug parties where anything can happen. Like the more famous exploitation classic Reefer Madness (which shares cast member Dorothy Short), this "suspense thriller" vividly reflects the hysterical anti-drug propaganda of its time.

NARCOTIC (1933): One night in an opium den sends respectable young doctor William Davis hurtling down the slippery slope to doom and self-destruction. When his drug habit renders him incapable of practicing medicine, Dr. Davis becomes a sideshow huckster shilling miracle elixirs. The income provided by snake-oil sales only fuels Davis' monstrous appetite for drugs. A debauched orgy with loose women, cocaine, and heroin leaves him empty and wasted. With his life in ruin, madness and suicide await foolish Dr. Davis! Director Dwain Esper defined 1930s exploitation films with reactionary social-issue movies such as Maniac (1934), Marihuana, The Weed With Roots In Hell! (1936), How To Undress In Front Of Your Husband (1937), and Sex Madness (aka They Must Be Told!) (1938). Esper gleefully depicted all sorts of scandalous behavior in his movies, allegedly in the interest of warning and educating the public. Narcotic is his most professional and slick production - a worthy mate to such cult movies as Reefer Madness and Damaged Lives.