It shouts and sings with life ... explodes with love! 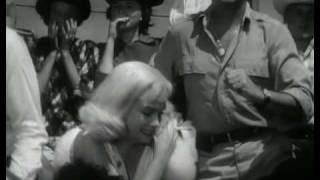 Sophisticated, but emotionally crippled Roslyn (Marilyn Monroe, giving what many believe to be her strongest performance) has come to Nevada to gain a quick and easy divorce. When her landlady introduces her to aging, broken cowboy Gay Langland (Clark Gable), she finally finds herself with a worthy partner. Meanwhile, Gay and his fellow horsemen Guido and Perce (Eli Wallach and Montgomery Clift) scheme to capture a herd of wild horses. Though megawatt star power and a brilliant script by Arthur Miller failed to turn THE MISFITS into box office success (probably due a legendarily troubled shoot), time and critical reputation treated it very kindly. It was the final film for icons Gable and Monroe.

A down-on-her-luck, divorced woman meets and falls for a disenchanted outcast cowboy who earns his living by capturing wild mustangs. When she witnesses this cruel spectacle, she recoils in horror -- then teams up with a jaded rodeo performer in an attempt to free the horses.