The Sword of Sherwood Forest 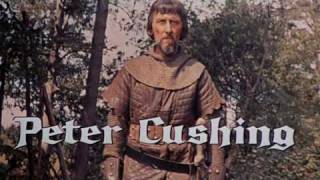 Having portrayed Robin Hood on TV for five years, Richard Greene reprises the role in Hammer Films' SWORD OF SHERWOOD FOREST. This time, Robin does a little undercover work to determine the wicked machinations of the Sheriff of Nottingham (played by Hammer stalwart Peter Cushing). Our Hero and the Merrie Men do their best to foil a plot to kill the Archbishop of Canterbury (Jack Gwillim). Sarah Branch co-stars as the obligatory Maid Marian. SWORD OF SHERWOOD FOREST was released in the US by Columbia Pictures.

Customer Rating:
Based on 1351 ratings.


This 1960 movie stars Richard Greene as Robin Hood. As Greene had portrayed the same character in the The Adventures of Robin Hood TV program (1955-60), one might assume that this theatrical movie is the finale for the series. This motion picture, however, really has nothing to do with the television series other than sharing the same legendary characters and the same leading man. Different actors portray Little John, Maid Marian, the Sheriff of Nottingham and Friar Tuck in Sword of Sherwood Forest than in The Adventures. And while Robin and Marian were well established as a couple early in the TV series, we see them meet for the first time in the movie.
So, what is the movie? Well, it’s another story based on the Robin Hood legend. The acting and production values are quite good, and the scenery is beautiful in this Anamorphic Widescreen presentation. The movie plot develops slowly, but eventually one discovers the mystery of the unknown rider who is fatally injured as he fled into Sherwood Forest on horseback. **Spoiler Alert** Eventually we discover a plot to kill the Archbishop of Canterbury (Jack Gwillim). The Sherriff (Peter Cushing) is a member but not the leader of the conspiracy; and Robin, Little John (Nigel Green), Friar Tuck (Niall McGinnis aka Niall MacGinnis) and the rest of Sherwood’s stout lads try to save the clergyman who is a champion of the people’s rights.