From The Beginning To The End 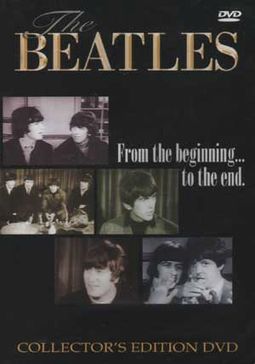 Get email alerts for The Beatles
Available: Usually ships in 2-4 business days
LOW STOCK:
Only 2 copies left
Add to Cart
Add to Wishlist
Format:  DVD
item number:  65264
Products with a similar style:
The Rolling Stones - Sympathy For The Devil (DVD) $19
91% recommend us!

Beginning with their first performances in tiny Liverpool and Hamburg nightclubs, this documentary follows the incredible rise of The Beatles to a worldwide phenomenon. You can feel the excitement and witness the hysteria surrounding their first trip to the United States for an appearance on the "Ed Sullivan Show," a performance that first exposed the four mop-tops to a North American audience. There are many "behind the scenes" insights into the group, giving us a glimpse into John, Paul, George and Ringo rarely seen.

This DVD documents the energy of the '60s, the idealism of the '70s and - for some - the disillusionment of the '80s. It's a stirring tribute to four boys from Liverpool who conquered the world and changed the direction of popular music forever.

The story of The Beatles is well documented, but this behind-the-scenes look at the Fab Four manages to unearth some rare delights in the shape of barely seen archival footage. Charting the entire tale from beginning to end, this fascinating portrayal offers a look at all the periods of the band's existence, as well as some detail on solo projects and the aftermath of the band.

The Beatles
Their Golden Age
$8.70 Super Savings
Add to Cart