Includes the uncut, never-before-released version of "Expressway (To Your Heart)" 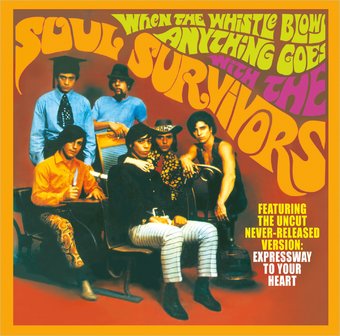 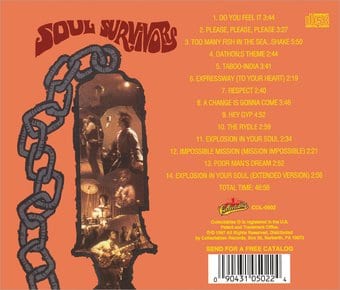 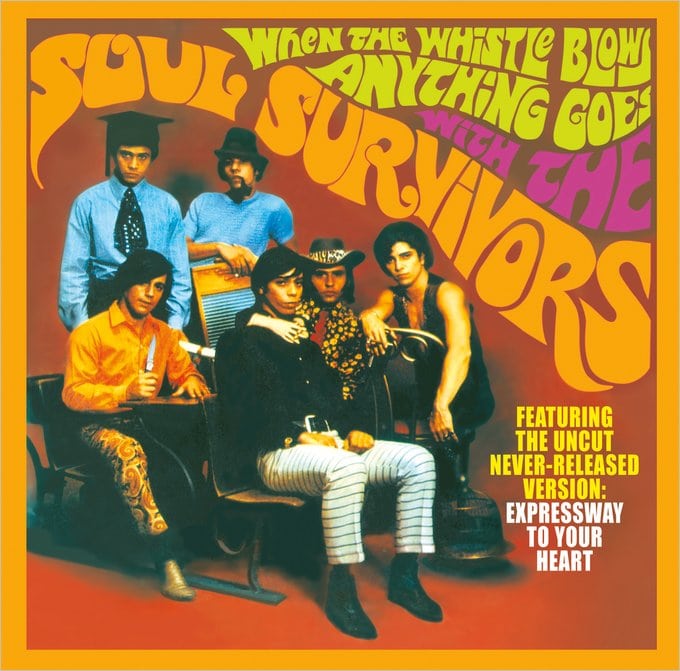 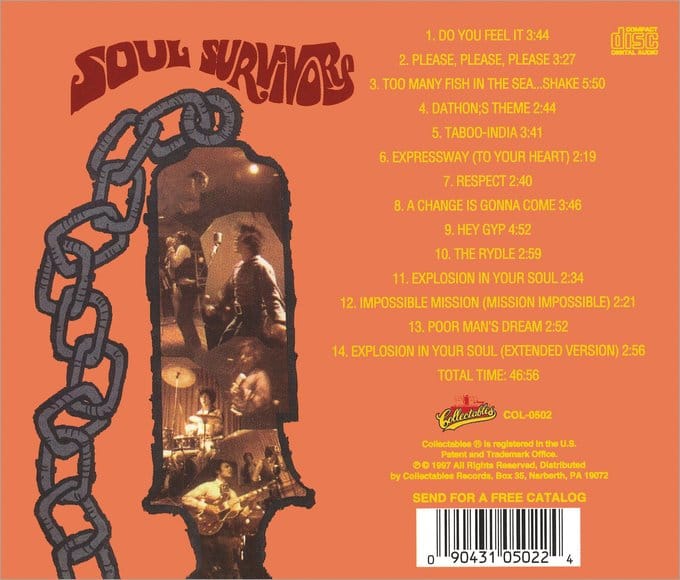 It was late 1966, and nearly five years since I left New York at age 18 to open the Record Museum store at 1005 Chestnut Street in Philadelphia, with my partner, Jared Weinstein. We sold a lot of reissued past hits, which had come to be known as "oldies." Because of the great demand for this music, Jared and I had formed a wholesale distributorship called J&J Distributors, which sold oldies to other record stores. One of our customers was a record store in the 1300s block of South Street, which was owned by Kenny Gamble. In addition to operating his record store, Kenny was writing and producing songs with his partner, Leon Huff. In prior years he had also performed with the vocal harmony group Kenny Gamble & The Romeos.

Around that time, a young man (age 17) named John Oates used to frequent Record Museum, which was a popular hangout for music fans. He had a group called The Masters, and my partner and I released their first single "I Need Your Love" backed with "Not My Baby" on our Crimson Records label (#CR-1008). After his time with The Masters, John teamed up with Daryl Hall to form Hall & Oates, and enjoyed incredible success.

One day when Kenny was in my store picking up his order, we had a discussion about The Masters' single. I told him that Jared and I wanted to build the Crimson label and continue putting out records. Kenny told me that if I had another group I wanted to record, he'd like to produce the record. Jared and I had just signed a group called The Soul Survivors, and I felt that having Kenny and Leon work with them would be a good match. The band was doing a gig at a club called The Living Room at 13th and Locust Streets, so I told Kenny that he and Leon should go and check them out. Kenny and Leon liked what they heard and saw, so they got together with the band and went to work.

Jared and I were friendly with Bernie Lowe, who owned Cameo-Parkway Records. His labels are legendary for hits by Charlie Gracie (Butterfly), Bobby Rydell (Volare), Chubby Checker (The Twist), The Dovells (The Bristol Stomp), Dee Dee Sharp (Mashed Potato Time), The Orlons (Don't Hang Up), The Tymes (So Much In Love), and Question Mark and The Mysterians (96 Tears).

The original Cameo-Parkway studios were located in an office building in the same block of Locust Street (between Broad and 15th Streets) as the Academy of Music. The studio was surrounded by lawyers and accountants who were annoyed to no end by the loud music. Even when they tried recording only at night, they ticked off their late-working neighbors. When their lease was up the building management threw them out, and they moved to 309 South Broad Street, which later became the headquarters for Gamble & Huff's Philadelphia International Records.

Bernie gave us studio time at a reduced rate so long as we paid for the tape we used, and we worked with their engineer, Joe Tarsia. Soon after, Joe pooled all of his assets to open Sigma Sound Studios, from which most of the music known in the 1970s as "The Sound Of Philadelphia" originated. Altogether, the studio time for the Soul Survivors' sessions at 309 South Broad cost a little over $300 for about three days' work.

Kenny Gamble and Leon Huff produced the Soul Survivors' sessions. My partner Jared and I went down to the studio to watch the recording process. In exchange for their services, Kenny and Leon got full ownership of the publishing for their compositions appearing on the album, including "Expressway To Your Heart."

Kenny and Leon were really excited when they finished "Expressway." Kenny called from the studio and said, "You have GOT to hear this." Jared and I headed over after closing our store at 6 p.m. Kenny and Leon played it for us. It was incredible. From the great R&B arrangement to those soulful, yearning vocals to the car horns and traffic sounds, it was clear that Kenny and Leon and the group had just nailed it. There was just one little problem. "I think it's too long, Kenny," I said. Kenny played it again while we timed it and it came in at three minutes, forty-two seconds. Now I know that these days that's not considered a long song by any means. But at that time on Top 40 AM radio, NOBODY was playing songs over three minutes. Even The Doors' "Light My Fire", which is over seven minutes on the album, was edited down to 2:52 for radio play.

I said, "Kenny, it's great. But it's not gonna get played on radio. You have to cut it down." Kenny was adamant: "I'm not cutting it." Me: "What's the point in putting out a record if it's not going to get played?" Kenny got really upset and walked out. Leon followed... in a huff.

The next morning when I opened the store at 9:00 a.m., I got a call from Joe Tarsia. He told me that Kenny and Leon had come back to the studio that night and worked with Joe until two in the morning to cut the record down to 2:21. I listened to their edit: even with more than a minute gone, it was still great. The guys had whittled down the bridge (which had some really solid guitar work) and replaced the song's ending with a fade. It was really a shame to lose the pulsating beat and the dynamite harmony that originally took the song out. But, that's the edit that we released as Crimson single #1010. On the flip side was "Hey Gyp (Dig The Slowness)", a cover of a song by Donovan. The group had really wanted to record this song and requested that it be the B-side to Expressway.

For the album "When The Whistle Blows Anything Goes" (Crimson LP-502), we had a cover photo of the group which featured Soul Survivor Kenny Jeremiah seated at an old-fashioned schoolroom desk with a knife in his hand. When we received our sample pressing from Queens Litho who did the jacket, we took it around for feedback. Almost every person who saw the cover said the knife in Kenny's hand sent the wrong message, so we had the photo retouched to take out the knife.

I did the national promotion for the single, with some assistance from Kal Rudman. Kal later founded Friday Morning Quarterback, the trade magazine for radio and music which became known as the industry's "bible." My partner Jared took care of getting the record to the distributors. My wife Nina had many a sleepless night while I sat up in bed calling radio stations all over the country. Then I'd send out copies of the single to the disc jockeys and program directors to whom I'd raved about the record. Nina made me promise that we would get a dog if the song went to Number One. She wanted a Bichon Frise, just like the one Barbra Streisand had.

Because of the Soul Survivors' sound, program directors from the R&B stations thought the group was racially mixed. Welcoming these stations' airplay of the single, I did nothing to change this impression. The group's manager got them a spot on ABC's Joey Bishop Show. I was against this, because I felt "Expressway" was getting better milage coming from a group with some mystery as to their ethnic makeup. However, I was overruled. The group was excited about appearing on national television, and naturally their parents and families were thrilled. Unfortunately, my fears were realized. As soon as it was apparent that the Soul Survivors were an all-white group, the single dropped off the R&B charts, which hurt the record's momentum. While it did reach #4 on Billboard's Hot 100 on September 23, 1967, I believe it could have made it to #1 with continued airplay from the R&B stations. "Explosion In Your Soul" went up to #33 on January 20, 1968.

Here for the first time is the full, original version of "Expressway To Your Heart" as originally produced by Kenny Gamble and Leon Huff and engineered by Joe Tarsia in 1967. Included as a bonus is the unaccompanied vocal track, which I feel is really powerful.

In case you were wondering: even though the single didn't make it to #1, Nina got her Bichon. - Jerry Greene


IT IS TOO BAD THAT THIS GROUP DID NOT MAKE IT LIKE THE YOUNG RASCALS DID--THEY WERE EVERY BIT AS GOOD AS THEM--IF NOT BETTER. THEIR VERSION OF 'A CHANGE IS GONNA COME' IS THE BEST RENDITION I EVER HEARD. THEIR VERSION IS SECOND ONLY TO THE SAM COOKE ORIGINAL. THANKS TO YOU THIS ALBUM IS ON CD. I GOT MY FIRST COPY OF IT IN 1990--AND WHEN YOU RELEASED THE EXPANDED VERSION I GOT IT TOO--I STILL HAVE THE ORIGINAL CD. IF IT EVER COMES OUT ON VINYL I'LL GET IT.