Q: Recommended - "..It will delight fans old and new." 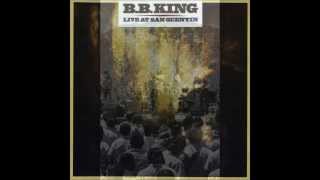 Q
Recommended - "..It will delight fans old and new."
Down Beat - 6/91
4 stars - Very Good - "..a loose, cooking affair that gets your blood boiling and your feet moving."
Living Blues - 5-6/91
"King has long been involved with issues of prison reform, and like the earlier live recording he made at a penal instituion, "Live At Cook County Jail," his empathy and concern for the inmates is reflected not only in the fact of his performance and recording, but in the quality of the performance heard here...everything is done with King's typical intensity and substance."
Living Blues - 7-8/01, p.82
"...Boasts crisper sound than the original....the performances are professional and well executed..."

Personnel: B.B. King (vocals, guitar); Leon Warren (guitar); Walter King, Edgar Synigal (saxophone); James Bolden (trumpet); Eugene Carrier (keyboards); Michael Doster (bass); Calep Emphrey (drums).
All selections recorded live at San Quentin Prison on May 25, 1990 except "Peace To The World".
All tracks are digitally remastered.
Much gutsier than the REGAL album, this is in harmony with the patrons as King plays to a different audience; the inmates of one of America's toughest prisons. King devotes a lot of his time every year performing to prisoners, and he coummunicates on this album without patronizing them. This is a fairly predictable set but the high level recording (presumably to block out any obscenities) makes it one of his most exciting live albums. Songs he has played a thousand times sound fresh and energetic, notably "Everyday I Have The Blues" and "Let The Good Times Roll."