Everyone has a past. Every legend has a beginning. 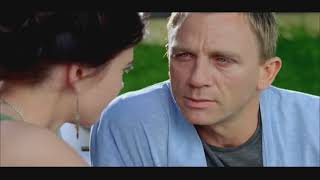 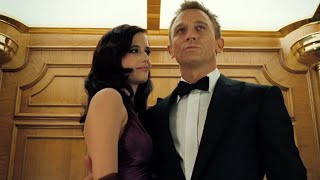 After a great deal of discussion--on the part of fans and producers alike--over Daniel Craig's (THE MOTHER, MUNICH) suitability for the role of James Bond, he more than proves himself in this explosive revamping of the franchise. Under the direction of Martin Campbell (THE MASK OF ZORRO) and with Paul Haggis (CRASH) helping with the re-writes, this addition to the Bond canon manages to hold true to the essence of the stories--the villainous villains, the fabulous sets, the beautiful women, the fast-paced action--while updating the formula with subtlety and humanity.

Trading in the Cold War era for a new, post-9-11 landscape, the tale unfolds in locations that span the globe, including the Bahamas, Venice, and the Czech Republic. It opens in Madagascar, where Bond pursues a guerilla bomb-maker in one of the most breathtaking chase scenes ever--and it all takes place on foot. Botching that assignment, Bond goes to Montenegro to square off against terrorist baddie Le Chiffre (Mads Mikkelson), an international loan shark who gambles with the money of his equally dangerous clients. Beautiful British Treasury representative Vesper Lynd (Eva Green, THE DREAMERS) supplies Bond's own funds, appearing on his arm in Montenegro, while M (Dame Judi Dench, PRIDE AND PREJUDICE) keeps a close watch on the action from headquarters. The extravagant poker game forms the center of the action, with Jeffrey Wright (SYRIANA, THE MANCHURIAN CANDIDATE) putting in an intense appearance at the table; interrupting the game are assassination attempts, poisoning, and other dramatic events that keep the adrenaline pumping. The flirtation that unfolds between Bond and Vesper Lynd is only in keeping with the spy's M.O. as a ladies' man. What differs here, however, is what sets this Bond apart from the rest: the romance is taken seriously, and it exposes a vulnerability in Bond that he's never shown before. This, however, only makes him the tougher, as Craig's Bond is darker, less campy, more brooding and mysterious, than his past incarnations ever were.

The Bourne Ultimatum
$8.20
Add to Cart