Get email alerts for Astor Piazzolla
Currently Out of Stock: We'll get more as soon as possible
Notify Me When Available
Add to Wishlist
Format:  CD
item number:  6JJ65
Our customers love us! 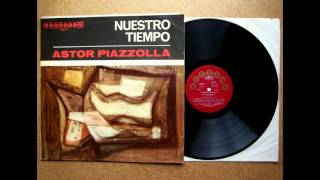 Liner Note Author: Astor Piazzolla.
The Astor Piazzolla Edici¢n cr¡tica being undertaken by the Argentine branch of Sony/BMG aims to reissue many of Piazzolla's original recordings, in CD form, with their original artwork and sequencing. The original notes by Piazzolla himself are on one side of a square sheet folded in quarters and serving as the booklet; additional notes, a biography, and the original cover artwork are on the other side. All the notes are in Spanish only, probably a mistake given Piazzolla's international popularity, but Spanish readers will enjoy Piazzolla's elegant and just slightly tongue-in-cheek commentary. The best thing about the series is that most of the albums included have long been unavailable in their original forms. The present disc, Nuestro Tiempo, was reissued by Sony in Japan as part of its six-disc Piazzolla series, but the original LP may well be hard to find even in Argentina. Nuestro Tiempo dates from 1962, early in the career of Piazzolla's Quinteto Tango Nuevo or New Tango Quintet, and as much as any other release it shows Piazzolla hitting his stride and fully exploring the modern tango-classical fusion idiom that has been his legacy. Like others in the series, the album presents a vision of Piazzolla somewhat different from the one formed as he achieved worldwide renown in his old age. There are three vocal selections featuring singer Hector de Rosas, one of them with a text by Piazzolla's late daughter Diana. Unlike on some of the earlier Piazzolla releases, the progressive idiom penetrates these as well; they seem like precursors to Piazzolla's 1968 tango opera Mar¡a de Buenos Aires. Most of the instrumental pieces, with the major exception of La Muerte del  ngel (track 2) and its associated Introducci¢n al  ngel, are not among the big Piazzolla hits, but the consistently experimental quality of the material is compelling throughout, with echoes of Bart¢k and Stravinsky and of forward-edge American jazz in addition to Piazzolla's usual French influences. The pure, rarefied gloom of the mature Piazzolla is here only in a few spots, but that is just one aspect of his output. Sample the grim opening, quartal harmonies, and dissonant antiphony in the quizzically titled (even for Piazzolla) Im genes 676, for instance. This piece appears on no other Piazzolla album, and it suggests how completely Piazzolla's classic pieces rested on a foundation of true experimentation. The whole album is strongly recommended, even for those planning to buy just a few releases in this series. The album includes four bonus tracks from another 1962 LP by vocalist Roberto Yan‚s, with Piazzolla and his group serving as accompanists; these are intriguing in that they show Piazzolla's ability to play it straight even at this late date, but they're not really of a piece with the rest of the music.~James Manheim