7.4K ratings
Currently Out of Stock: We'll get more as soon as possible
Notify Me When Available
Add to Wishlist
Format:  Blu-ray
item number:  7KDF4
Also released as:
Arabesque (Blu-ray) for $21.80
91% recommend us! 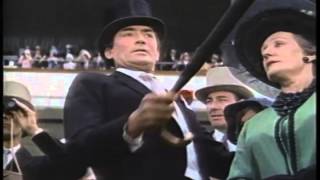 After nobly aiding an Arabian prime minister who requests his help in decoding a hieroglyphics message, American professor David Pollock (Gregory Peck) finds himself pursued by two murderous men who each wants the secret message for himself. Completely unprepared in temperament or experience for this excitement, Pollock does the best he can, sometimes aided and sometimes hindered by the alluring but mysterious Yasmin (Sophia Loren). Yasmin's lies and her romantic alliance with both men after Pollock make her a poor choice as a partner, but Pollock isn't entirely immune to her charms either. When Pollock decodes the message, Yasmin's motives are revealed as well, and only quick thinking will save the lives in danger.

Wonderful camerawork that increases the tension of each scene combines with great chemistry between Loren and Peck to create a dynamic, memorable, and fun espionage movie. Filmed near the beginning of the James Bond series, ARABESQUE shares some characteristics, such as big chase scenes, humor, and a beautiful girl, with those movies. But Loren's Yasmin, smart and unfathomable as well as desirable, has character beyond most Bond girls, drawing the viewer's gaze in every scene.

Stylishly shot, making excellent use of reflecting and distorting mirrors to increase the feeling that things are not what they seem, ARABESQUE tracks the attempts of a good-intentioned but slightly bumbling American professor (Gregory Peck) to decipher a secret message while evading the dangerous attentions of two Arab men with separate agendas. Sophia Loren as the gorgeous but untrustworthy Yasmin attaches herself to Peck as she plays all sides against each other. As they grow closer to unraveling the secret message, Peck must decide if he can trust Loren--for the stakes are as high as his life.