Get email alerts for Art Tatum
Out of Print: Future availability is unknown
Notify Me When Available
Add to Wishlist
Format:  CD
item number:  6JHKX
91% recommend us! 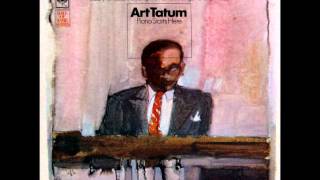 Solo performer: Art Tatum (piano).
Includes original release liner notes by Leonard Feather & new liner notes by Chip Stern.
There are many Art Tatum records available, but this is the one to pull out to amaze friends, particularly with Tatum's wondrous version of "Tiger Rag," during which he sounds like three pianists jamming together. This CD consists of Tatum's first studio session as a leader (which resulted in "Tea for Two," "St. Louis Blues," "Tiger Rag," and "Sophisticated Lady") and a remarkable solo concert performance from the spring of 1949. While "Tiger Rag" dwarfs everything else, the live set is highlighted by a very adventurous, yet seemingly effortless exploration of "Yesterdays," a ridiculously rapid "I Know That You Know," and the hard-cooking "Tatum Pole Boogie." This is an essential set of miraculous music that cannot be praised highly enough. ~ Scott Yanow