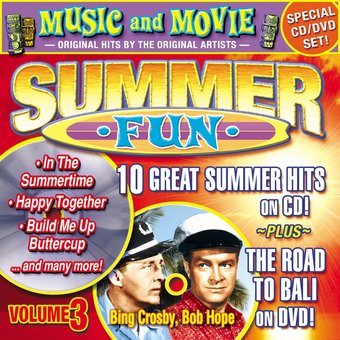 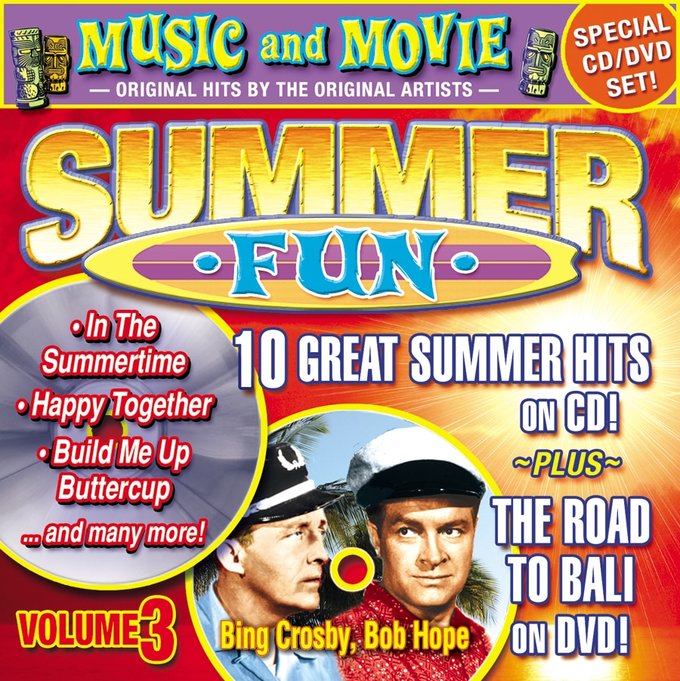 Special music and movie combo pack includes 10 great summer hits on CD, plus THE ROAD TO BALI on DVD.

CD includes ten original hits by the original artists: "In the Summertime" by Mungo Jerry, "Beach Baby" by First Class, "Happy Together" by The Turtles, "Dancing in the Moonlight" by King Harvest, "Seasons in the Sun" by Terry Jacks, "Build Me Up Buttercup" by The Foundations, "Best of My Love" by The Emotions, "Brandy" by Looking Glass, "Theme from "A Summer Place"" by Percy Faith and "Palisades Park" by Freddy Cannon.

DVD includes THE ROAD TO BALI: This adventure comedy, starring Bob Hope and Bing Crosby is the sixth entry in their madcap Road series. Hope & Crosby play American vaudevillians, George Cochran and Harold Gridley, stranded in Australia and desperate to avoid a dual shotgun wedding. To escape, they sign on as deep-sea divers for an evil South Sea Island prince, and then the fun begins in earnest. They hunt for treasure, wrestle an octopus, fall in love with the same princess, befriend a gorilla, and encounter an active volcano. Road to Bali is packed with slapstick, "insider" jokes, witty gags, and an exciting array of guest appearances, including Bing's brother Bob Crosby, Jane Russell and Humphrey Bogart.

Some Like It Hot (Criterion Collection) (2-DVD)
$26.10 Super Savings
Add to Cart

Some Like It Hot (Criterion Collection) (Blu-ray)
$34.50 Super Savings
Add to Cart