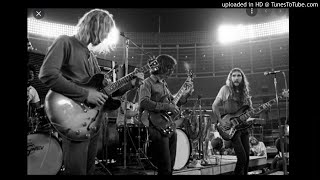 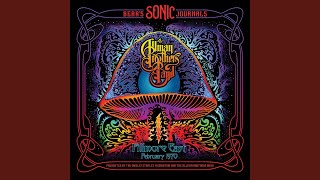 FILLMORE EAST 2/70, which documents the Allmans' opening set for the Grateful Dead at the Fillmore East (the Dead's show is available separately on DICK'S PICKS VOLUME FOUR) is currently available by mail-order only--contact your local retailer about ordering information.
Allman Brothers Band: Gregg Allman (vocals, Hammond B-3 organ); Duane Allman (acoustic & slide guitars); Dickey Betts (guitar); Berry Oakley (vocals, bass); Jaimoe "J. Johanny Johnson" (drums, percussion); Butch Trucks (drums, tympani).
Recorded live at the Fillmore East, New York, New York on February 13, 1970. Includes liner notes by Owsley Stanley.
The Allman Brothers shared the bill with the Grateful Dead on several notable occasions. This release recalls the Brothers in support of the Dead and Love in February 1970 at the fabulous Fillmore East. No specific dates for the performances are noted, so it is presumed this release is a composite from recordings made at some point during the two sets per night that the Allman's performed on February 11th through the 14th. There is no mistaking the unbridled fervor of the original line-up of the band. Rising to the challenge of exploratory psychedelia -- while remaining ever faithful to their Southern blues roots -- blues standards such as "(I'm Gonna Move to The) Outskirts of Town" and "Hoochie Coochie Man" are strengthened and extended beyond their typical assertions. No longer are they relegated to the inadequately rendered thrashings of garage rock. Betts and the Allman's understand the dynamics of blues. It is out of this respect for the art form that the band is able to pull off such authentic psychedelia-tinged Delta sounds. Likewise, the Allman Brothers were beginning to ascend as not only premier interpreters, but purveyors of a revolutionary new electric guitar-driven blues movement including the likes of Led Zeppelin, Eric Clapton's various outings, as well as the Ron "Pigpen" McKernan-led Grateful Dead. The early originals and performance staples "Whipping Post," "In Memory of Elizabeth Reed," and "Mountain Jam" -- which is based on the Donovan Leitch song -- are nothing short of revelatory. The band gels instantly into a symbiotic instrument with each member both playing and listening in equal measure. The recording also bears mentioning. Stanley Owsley -- the Grateful Dead's very own sonic solution -- recorded this music the same way that he documented the Dead night after night. His theories on live recording are unique and capture aural insights that are lost to some. Fillmore East, February 1970 is available exclusively through Grateful Dead Production. ~ Lindsay Planer

22%off
The Allman Brothers Band
Hell & High Water: The Best of the Arista Years
$10.98 on Sale
Add to Cart

17%off
The Allman Brothers Band
Midnight Rider: The Essential Collection
$9.98 on Sale
Add to Cart

15%off
The Allman Brothers Band
Where It All Begins (180G/Translucent Blue & Black Swirl...
$50
Add to Cart

Widespread Panic
Light Fuse, Get Away
$11.98 on Sale
Add to Cart