Get email alerts for Ambrosia
60 ratings
Available: Usually ships in 3-5 business days
Add to Cart
Add to Wishlist
Format:  CD
item number:  HJAA
Related products:
Dance with Me: The Best of Orleans for $5.50
The Very Best of Todd Rundgren for $11.80
The Very Best of England Dan & John Ford Coley for $18.10
Firefall: Greatest Hits for $9.10
Our customers love us! 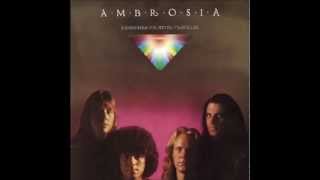 Ambrosia: David Pack (vocals, guitar); Chris North (vocals, keyboards); Joe Puerta (vocals, bass); Burleigh Drummond (vocals, drums, percussion).
Additional personnel includes: Michael McDonald, James Ingram (vocals).
Personnel: David Pack (vocals, guitar); Christopher North (vocals, keyboards); Burleigh Drummond (vocals, drums, percussion); Joe Puerta, James Ingram (vocals).
Liner Note Author: Arthur Levy .
For various legal reasons, no Ambrosia recordings were released on compact disc in America until 1997's Anthology, and while it's an imperfect collection, it does offer a reasonably thorough overview of the group's career. It only briefly touches on their early art rock records, choosing to concentrate instead on their early-'80s soft rock hits like "Biggest Part of Me," "You're the Only Woman," and "How Much I Feel." As a result, dedicated prog rock fans will find this collection inadequate, but for most casual listeners, it will contain everything they need and then some, since the disc is padded with three new songs that are pleasant. ~ Stephen Thomas Erlewine