305 ratings
Out of Print: Future availability is unknown
Notify Me When Available
Add to Wishlist
Format:  DVD
item number:  J735
Also released as:
Jamboree for $16.20
91% recommend us! 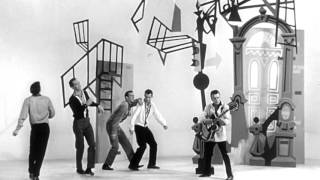 As soon as 1955's Rock Around the Clock sounded the opening notes of the first-ever rock 'n' roll movie, others were sure to follow. Did they ever: 1957 boogie-woogied, doo-wopped and shimmy-shaked with, among others, Jailhouse Rock, Shake, Rattle and Roll and this star-packed Jamboree!

The music is cued here by the era's microphone gods (including Dick Clark) and sung by performers who made the world spin at 45 RPM. See the fiery Jerry Lee Lewis, string-twanging Carl Perkins, country styled Slim Whitman, Frankie Avalon, Count Basie, the "Elvis Presley of Brazil" and the great Fats Domino. Catch 21 songs, the DJ who's the "Ace from Outerspace" and two dance numbers to make any jailhouse - or your house - rock.

Musical drama about a hit romantic singing duo whose love affair is threatened when their feuding managers encourage them to go solo.

Customer Rating:
Based on 305 ratings.


This is your typical 50's teenage movie with a boring and dull storyline. However the musical groups are a must see. The music is the movie.