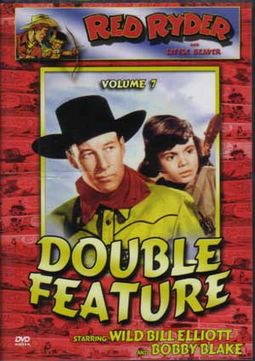 Great Stagecoach Robbery (1945): Red Ryder hopes his attempts at being a good role model will keep a young man, who idolizes his outlaw father, from following in the wrong footsteps.

Phantom of the Plains (1945): Red Ryder and Little Beaver must prevent the Duchess from falling victim to the crooked scam of a con man impersonating a British Aristocrat. Red's aunt is going to sell her stagecoach line and marry this Englishman who is in the habit of marrying rich women and then killing them for their fortune.

Allan Lane returns to the screen to reprise the character of Red Ryder in this double-feature. Among his many feature films and television appearances, Lane was perhaps best known to viewers--albeit unwittingly--as the voice of MR. ED on the hit TV show. Known by the nickname "Rocky," Lane stars here in GREAT STAGECOACH ROBBERY and PHANTOM OF THE PLAINS.