Q: 4 Stars - Excellent - "...The group's ever changing repertoire was always special, and there are some classic modern jazz tunes here..." 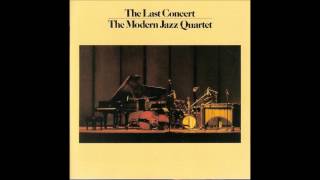 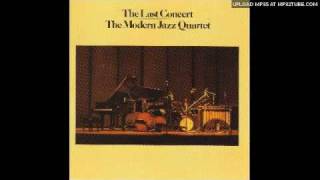 Modern Jazz Quartet: John Lewis (piano); Milt Jackson (vibraphone); Percy Heath (bass); Connie Kay (drums).
Recorded at Avery Fisher Hall, New York on November 25, 1974.
3 LPs on 2 CDs.
Modern Jazz Quartet: Milt Jackson (vibraharp); John Lewis (piano); Percy Heath (bass); Connie Kay (drums).
Recorded live at Avery Fisher Hall, New York on November 25, 1974. Includes liner notes by Nat Hentoff.
This two-disc live set features the Modern Jazz Quartet in its final concert (at New York City's Lincoln Center in 1974). Though the group would later reunite in the early '80s, there is the distinct feel of retrospective here, looking back on a career of remarkable invention and artistry. Both qualities are in ample evidence during this performance, which showcases the remarkable solo and ensemble playing of John Lewis (piano), Milt Jackson (vibes), Percy Heath (bass), and Connie Kay (drums).
The quartet is most notable for its blend of a chamber approach (in its use of the small group with carefully articulated interplay) and the rootsy groove of jazz. Though European classicism inside syncopated swing is (in many ways) the very structure of jazz, the MJQ drove the marriage home. (Even in appearance, they commanded respect by wearing tuxedos on stage.) Whether on standards ("Summertime," "A Night in Tunisia") or excellent originals ("Django," "Bags' Groove"), the MJQ display--in addition to superior musicianship--an abiding interest in history, tradition, and the integrity of the music. These traits help to make THE LAST CONCERT a suitably impressive exhibition by one of jazz's finest small ensembles.

31%off
The Modern Jazz Quartet
Plastic Dreams
$8.98 on Sale
Add to Cart