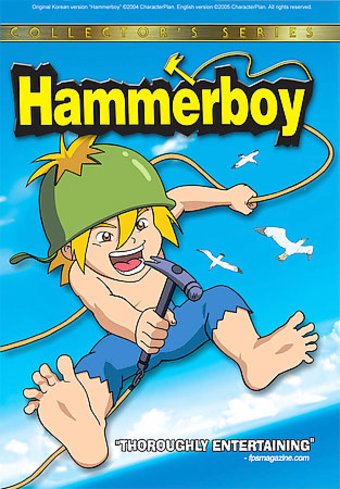 Director Tae-geun Ahn's animated full-length feature HAMMERBOY continues South Korea's foray into the world of anime with a charming children's fairy tale of fantasy adventure. On a futuristic Earth ravaged by years of natural disasters, orphaned preteen Mangchi (voiced by Seo-young Kim) lives with his loving grandfather in the isolated environs of Candlestick Island. Nicknamed "Hammerboy" for the ubiquitous tool he carries, Mangchi yearns for excitement and sees his chance in the arrival of fugitive Princess Poplar (voiced by Jeong-min Bae), who has crash-landed on Candlestick Island to escape the world-domination plans of the mutinous General Moonk (voiced by Seok-pil Choi). Together with a flying tricycle, his grandfather's powerful crystal, and, of course, his trusty hammer, Mangchi helps Poplar defeat Moonk and return to her home planet in a series of whimsical adventures fueled by innovative animation and storytelling that bear the distinct influence of Japanese anime legend Hayao Miyazaki.