Suggested by Dorothy Caruso's biography of her husband, The Great Caruso rings out with aural pleasures (27 musical selections) and shines with the grandeur of a life lovingly refracted through the Hollywood biopic lens. 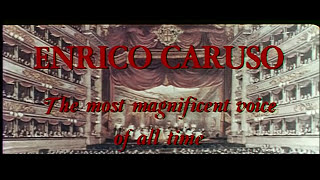 Bravo, Enrico! Bravo, Mario! Renowned tenor Mario Lanza portrays his long-time singing idol Enrico Caruso in the crowd-pleasing musical that was 1951's #4 box-office hit. Suggested by Dorothy Caruso's biography of her husband, The Great Caruso rings out with aural pleasures (27 musical selections) and shines with the grandeur of a life lovingly refracted through the Hollywood biopic lens. The music (by Puccini, Donizetti, Verdi and more) emphasizes works most closely associated with Caruso. The story, spanning Caruso's Naples boyhood to worldwide acclaim and tragedy-stricken final performance, touches on the down-to-earth character traits that spread the singer's fame beyond the black-tie society of Metropolitan Opera connoisseurs. Nominated for three Academy Awards, the movie won for Best Sound Recording.

This satisfying fictionalized biography explores the life and loves of the great tenor from Naples who became the toast of the Metropolitan Opera in New York City, but died just as he reached his peak. Lanza is magnificent in the role and the score is an opera lover's dream with 27 musical numbers including arias from La Boheme, I Pagliacci, and Rigoletto.