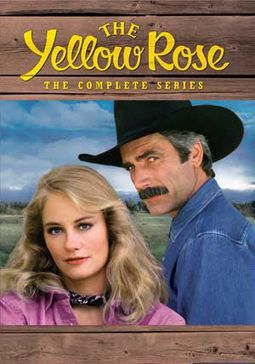 The Yellow Rose is 200,000 acres of cattle, oil and Texas pride. Which is why two proud Texas families, the Hollisters (who once owned the vast spread) and the Champions (the current owners), fight to possess it.

Here on five discs are all 22 episodes of the series that has everything -- lust and jealousy, schemes and secrets, greed and rivalry, kidnapping and murder -- that made sweeping 1980s TV epics like "Dallas" and "Falcon Crest" such hits. "The Yellow Rose" also boasts a cast as outsized and impressive as its home state: David Soul, Edward Albert, Cybill Shepherd, Sam Elliott, Chuck Connors and more. Ride alongside the prairie monarchs, share their dreams and dangers...but watch your back!

A program very much in the vein of DYNASTY and especially DALLAS (which it resembled on many levels) the one-season NBC drama THE YELLOW ROSE (1983-84) unfolded on the titular West Texas ranch, a sprawling estate of 200,000 acres that had been built by the late entrepreneur Wade Champion. Episodes followed various conflicts and passions that erupted in his family, especially as they involved his two sons, Quisto (Edward Albert) and Roy (David Soul) and his 29-year-old widow, Colleen (Cybill Shepherd), as well as Chance McKenzie (Sam Elliott), a strapping cowboy with a dark past, who just happened to be Wade's illegitimate son. This box set contains all 22 episodes from Season One.