Henry Tyroon likes what wealth can bring. "You do it for fun," he explains. "Money's just the way you keep score." 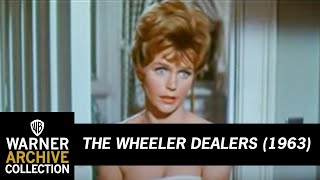 Henry Tyroon likes what wealth can bring, but that isn't why he spends so much time pursuing it. "You do it for fun," he explains. "Money's just the way you keep score."

James Garner scores big as Henry, a flimflammer who lands in New York City after his Texas oil well comes a duster, needing a million or so in pocket money to pay his debts. Soon, he also hopes to land a blue-eyed blue chip: a stock analyst (Lee Remick) pressured by her firm to unload a worthless stock. Can Henry come up with a plan to turn what's worthless into the hottest thing on Wall Street? The market for wit and charm is a sure thing in this mix of romantic comedy and business-world satire. Thirty years later, Garner would play a wheeler dealer of another era to award-winning effect as the CEO in Barbarians at the Gate.

A fast-thinking, slow-drawling Texas oilman trying to raise a quick million, heads for the cash-lined canyons of Wall Street where he joins forces with an ambitious stock analyst.

The world of Wall Street and its wheeler dealers take their "share" of jabs in this comedy. Wealthy Texan Henry Tyroon is an ethics-free fast-talker, who comes to New York posing as a hard up investor, in order to hustle a loan of a few million dollars. But he's smitten after meeting pretty security analyst Molly Thatcher. Molly's unscrupulous boss Bullard Bear falls for Tyroon's act, and sells him lots of useless stock. So imagine Bullard's reaction when the stocks turn out to be worth LOTS of money...

Romance | Scams And Cons | Theatrical Release
This product is made-on-demand by the manufacturer using DVD-R recordable media. Almost all DVD players can play DVD-Rs (except for some older models made before 2000) - please consult your owner's manual for formats compatible with your player. These DVD-Rs may not play on all computers or DVD player/recorders. To address this, the manufacturer recommends viewing this product on a DVD player that does not have recording capability.

18%off
Support Your Local Sheriff
$16.40 Super Savings
Add to Cart

18%off
Support Your Local Gunfighter
$16.40 Super Savings
Add to Cart