In a colorful whodunit, James Garner's easygoing style contrasts agreeably with the grim task of sleuthing a case of missing persons, blackmail and ice-pick murders.

3.8K ratings
Currently Out of Stock: We'll get more as soon as possible
Notify Me When Available
Add to Wishlist
Format:  DVD-R
item number:  FGCR
91% recommend us! 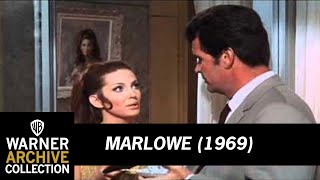 Five-hundred bucks doesn't come easily for private eye Philip Marlowe (James Garner). But when it comes by way of a bribe, it might as well be five cents. He rejects Winslow Wong (Bruce Lee) and his offer of cash...and Wong promptly karates the detective's office into a junkpile.

In a colorful whodunit based on Raymond Chandler's The Little Sister, Garner's easygoing style contrasts agreeably with the grim task of sleuthing a case of missing persons, blackmail and ice-pick murders. Carroll O'Connor, Rita Moreno, William Daniels, Sharon Farrell and Jackie Coogan are among the cast of characters living in a sprawling '60s L.A. so hard-boiled somebody's got to crack. And when that happens, it's Marlowe's job to put the pieces together.

Based on Raymond Chandler's "The Little Sister." Philip Marlowe is hired by a girl to find her missing brother. A beautiful stripper helps solve the case.

Author Raymond Chandler's gumshoe, Philip Marlowe, agrees to work for a mysterious young woman who wants him to find her missing brother. While gathering clues, Marlowe becomes enmeshed in a web of intrigue, where the people he encounters are not as they seem -- or want him dead. And unfortunately, Marlowe's client falls into one of these two categories. Can the private eye solve the case... without losing his life in the process'