Nubi is a flashing-eyed Gypsy who insinuates herself into the household of prosperous farmer Josef Lajos. Just for the fun of it, she seduces her way up the chain of power, from servant to Lajos's son to Lajos himself, sowing jealousy and conflict. 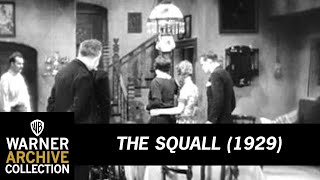 "My ultimate vamp came in The Squall," Myrna Loy noted about the string of exotic mantraps she portrayed before The Thin Man made her film's savviest, sexiest perfect wife. Here she is Nubi, a flashing-eyed Gypsy who insinuates herself into the household of prosperous farmer Josef Lajos (Richard Tucker). Just for the wicked fun of it, Nubi seduces her way up the chain of power, from servant to Lajos's son to Lajos himself, sowing jealousy and conflict in a once-tranquil home. As directed by Alexander Korda (The Private Life of Henry VIII, That Hamilton Woman), The Squall is the ultimate vamp's movie all the way: even lovely Loretta Young, playing the ingenue, pales like virtuous vanilla next to Loy's tempestuous sinner.

Still in the Hollywood phase of his career, director Alexander Korda made his talking-picture bow with Warner Bros.' THE SQUALL. Myrna Loy stars as Nubi, a sexy and seductive Hungarian gypsy girl who is caught in a torrential downpour. Taking refuge in a farmhouse, Nubi wreaks havoc on the male occupants, all of whom violently vie for her attentions. In other words, the film's title is both literal and symbolic. Loretta Young appears in the secondary role of Irma, sweetheart of emotional young farmer Paul Lajos (Carrol Nye). THE SQUALL was based on a play by Jean Bart.
This product is made-on-demand by the manufacturer using DVD-R recordable media. Almost all DVD players can play DVD-Rs (except for some older models made before 2000) - please consult your owner's manual for formats compatible with your player. These DVD-Rs may not play on all computers or DVD player/recorders. To address this, the manufacturer recommends viewing this product on a DVD player that does not have recording capability.

Ever After: A Cinderella Story
$8.40 Super Savings
Add to Cart