Mrs. Brown is a greyhound that Herman and the other boys are eager to make money on by racing her. They play gigs to raise money for the entry fees. At the London dog-race, he meets a human Mrs. Brown who has a knockout of a lovely daughter. 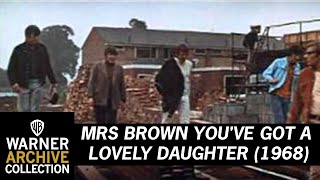 Mrs. Brown has a long snout, skinny legs...and an owner! That's right, Mrs. Brown is a dog, a greyhound to be precise, and Herman (Peter Noone) and the other Manchester boys are eager to make money racing her. But first there's a matter of entry fees, so the guys play gigs to raise some cash. When they enter the London dog-racing world, Herman meets a human Mrs. Brown who happens to have a knockout of a lovely daughter. Is she the right girl for him?

The pop quintet that charted eleven Top-10 hits from 1964 through 1967 reteams in a non-concert film for the third and last time with this funfest that includes "There's a Kind of Hush", the title cut and more of the band's tunes plus gleeful moments of cockney cabaret. Cheerio, lads!

Herman's Hermits star in this musical comedy about a group of musicians who inherit a racing dog. Besides the title tune, "There's a Kind of Hush," "The World Is for the Young," and "The Most Beautiful Thing In My Life" are among the featured songs.

Adventure | British | 1960s
This product is made-on-demand by the manufacturer using DVD-R recordable media. Almost all DVD players can play DVD-Rs (except for some older models made before 2000) - please consult your owner's manual for formats compatible with your player. These DVD-Rs may not play on all computers or DVD player/recorders. To address this, the manufacturer recommends viewing this product on a DVD player that does not have recording capability.