An Evening with Silk Sonic
by Bruno Mars / Anderson .Paak 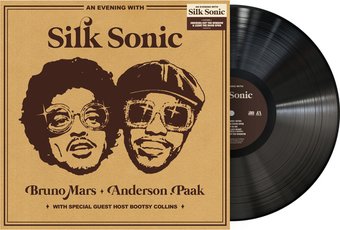 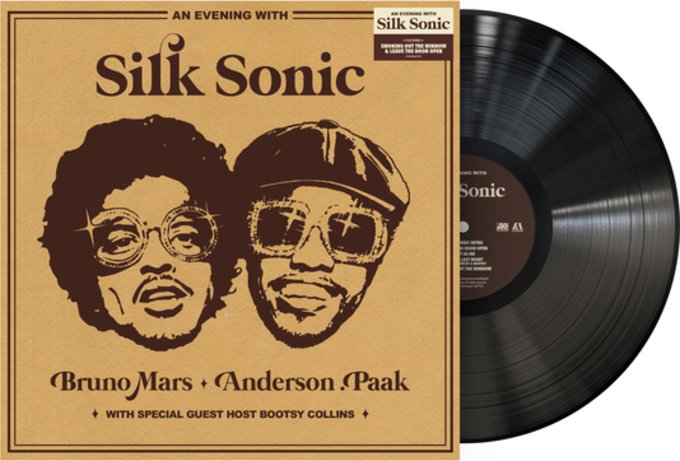 Rolling Stone
4 stars out of 5 -- "The result is the most enjoyable record Mars has been a part of -- a glorious excuse to turn out the lights, break out the bubbly and let the sublime power of their almost troublingly uncanny retro verisimilitude work its mimetic magic on your soul and mind."
Rolling Stone
"Included in Rolling Stone's "The 50 Best Albums of 2021" -- "Mars' and .Paak's interests, talents, and comedic sensibilities blend seamlessly..."
Spin
"There are swellings strings and twinkling glockenspiels and Bootsy Collins cameos and swooning falsettos -- this level of hero worship could have been gimmicky in the wrong hands, but they're so devoted in their quest that every gesture feels reverent."
Billboard - "[T]he twin retro fetishists bringing charming skits, heart-shaped glasses, shirts opened from neck to navel and easily the silkiest grooves to hit top 40 radio in years."
NME (Magazine)
5 stars out of 5 -- "The record's nine rich and colourful tracks delight in all-out pop hooks, lush harmonies and conversational verses..."
Paste (magazine) - "With a swagger that could appeal to multiple generations, Silk Sonic reflect on a golden age of music with all the skill of their predecessors."
Pitchfork (Website) - "'Leave the Door Open,' 'After Last Night,' and 'Smokin Out the Window' are among the highlights, slathering elevated technique -- all those key changes -- with satisfying molten cheese."
Clash (Magazine) - "On an album dripping with big moments, the plucky bassline that propels 'Fly As Me' stands out, looping in your head long after you hit pause."

Anderson .Paak and Bruno Mars discovered a rapport in 2017 when the former, fresh off the release of Malibu, supported the latter on the 24K Magic tour. Mutual admiration and shared affinity for classic R&B predating their births, such as Motown and Philly soul -- and anything else with churning rhythm guitars, electric sitar, and flashy strings -- grew into Silk Sonic. The project was named by another favorite, funk legend Bootsy Collins, who hosts An Evening with Silk Sonic in expected cordial fashion on a handful of intros and featured appearances. The set would have to be left on repeat for at least six rotations to truly fill an evening -- it's only half an hour in length -- but none of the time is wasted. Paak and Mars might have had Teddy Pendergass' women-only concerts in mind as they made some of the ballads. "Leave the Door Open," an unlikely number one pop hit six months before the LP was released, is the number that best meshes the smooth and tender style of Mars with Paak's nephew-of-Bobby Womack rasp and comparatively Lothario-like (sometimes pushy) demeanor. The funkier slow jam "After Last Night" might invite comparisons to "Dick in a Box" but has a bit of Bootsy-style fantasy sleaze with a lyrical theme similar to "The Hunter Gets Captured By the Game." "Put On a Smile" provides more than mere entertainment with one of Mars' finest performances, while "Blast Off" coasts and sways like a 1979 Earth, Wind & Fire derivative. The energy in the uptempo material is all feel-good, too. The strutting "Fly as Me" lets loose a hook that recalls late-'60s/early '70s George Clinton ("[I Wanna] Testify," "I Wanna Know If It's Good to You"). "777," the most arrogant and ballerific cut, is shrewdly followed by the dashing roller disco jam "Skate," a Top 20 hit that preceded the album. The duo's playfulness here verges on hammy at times -- more often than on their solo recordings. The trade-off is that they push each other into new levels of showmanship without pandering to the audience. Besides, there's some genuinely witty stuff here. It's a wonder how Mars was able to keep his face straight while grousing, "Musta spent 35-45 thousand up in Tiffany's/Got her bad-ass kids runnin' round my whole crib like it's Chuck E. Cheese." ~ Andy Kellman