The story of the daring women who created Wuthering Heights and Jane Eyre. Ida Lupino and Olivia de Havilland portray the sisters, yearning for literary success and the love of the same man (Paul Henreid). 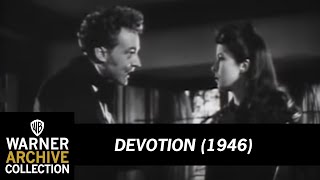 Sisters Emily and Charlotte Bronte lived to write, weaving tales rich with characters, incident and passion from the poor Yorkshire vicarage they called home. Devotion tells the story -- with more than a dash of literary license -- of these daring women who created Wuthering Heights and Jane Eyre. Ida Lupino and Olivia de Havilland portray the sisters, yearning for literary success and the love of the same man (Paul Henreid). Arthur Kennedy is a standout as their troubled brother Branwell, a would-be artist who drowns his talent in brandy. And a fine supporting cast, including Sydney Greenstreet, Dame Mae Whitty, Nancy Coleman and Montagu Love (in his final film), helps bring 19th-century England vividly alive.

Roundly blasted upon its release because of the extreme liberties it takes with the truth, DEVOTION is better as cinema than as history. Not that it's great cinema, mind you, mainly because the filmmakers opted to replace historical fact with either tired dramatic clichés or wild improbabilities. As an example of the latter, the film posits that Paul Henreid's character, who is a standard-issue film romantic hero (troubled, but understandably so), is the inspiration for two of the most passionate, fiery characters in the canon of English literature. Arthur Kennedy as brother Bramwell is much more passionate and fiery, a fact which tends to further muddle things up. The generic setting is also disappointing; these ladies wrote as they wrote because of where they lived and how they lived, but little of this makes it to the screen. Fortunately, DEVOTION has Olivia de Havilland and Ida Lupino on hand. De Havilland is quite good, grabbing hold of whatever she can find in the script and milking it for all it's worth. Lupino does even better, often making this standard-issue (at best) writing seem engaging and moving. As indicated, Kennedy also makes things work for him, and Nancy Coleman does what she can with the little she is handed. Erich Wolfgang Korngold's score provides plenty of the atmosphere that Curtis Bernhardt's direction often lacks. Ultimately, DEVOTION's assets, particularly Lupino and de Havilland, manage to squeeze it into the winner's column -- but it's a pretty close call. The film was produced in 1943, hence the presence of Montagu Love, who died that year.

Romance | Love Triangle | Period Piece | Brothers | Writers | Love Triangles | Biographical
This product is made-on-demand by the manufacturer using DVD-R recordable media. Almost all DVD players can play DVD-Rs (except for some older models made before 2000) - please consult your owner's manual for formats compatible with your player. These DVD-Rs may not play on all computers or DVD player/recorders. To address this, the manufacturer recommends viewing this product on a DVD player that does not have recording capability.