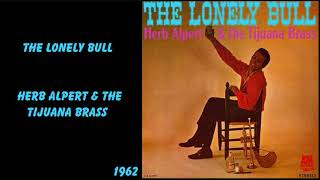 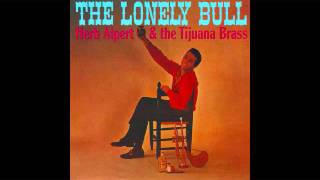 Recorded at Conway Recorders, Hollywood, California.
There is a dreamy-eyed wonder about Herb Alpert's debut album. Within its Latin-esque affectations, the album is a moodily romantic concoction of easy listening and progressive sounds. "El Lobo" is a portrait of love's sorrow, tenderly painted with trumpets, guitars, and ghostly vocal choruses. "The Lonely Bull" is cinematic, with imagery of bullfights vividly implied by the opening sound effects of a roaring crowd. The deep electric guitar sounds like the Ventures, a popular 1960s instrumental rock group.
Even at the outset, Alpert's style has the elements that he carried with him over the succeeding years. There's a preference for solid and dominant percussion and tempos, making all his work specifically geared for the dancing set. The Mexican melodies lend a cross-cultural vitality that was to persist in the trumpeter's work.

Herb Alpert
Over the Rainbow
$13.60 CD Sale
Add to Cart

Herb Alpert
South of The Border
$22.40
Add to Cart

58%off
Paul Weston
The Great Hit Sounds of Morningside of the Mountain (2-CD)
$9.98 CD Sale
Add to Cart