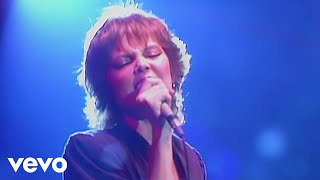 Pat Benetar broke down many barriers for women in the 1980s and proved that women can rock just as hard as men. Here are 20 of Benetar's absolute greatest hits on one CD; all of which have been digitally remastered. This unbelievable compilation includes the smash hits "Heartbreaker," "Hit Me With Your Best Shot," and "We Belong."


She is the best singer of all times and i will look forward to listening to her music.