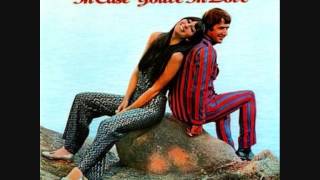 Q - 7/93, p.112
3 Stars - Good - "...Few acts define the mid-'60s as perfectly as Sonny & Cher. Trading shamelessly on a store-bought hippy image, they projected themselves as pop's first Happy Couple...for a short while they were the stuff of true romance and their's was a better soundtrack than most..."

Producer: Sonny Bono
Compilation producer: Bill Inglot.
Includes liner notes by Ken Barnes.
Digitally remastered by Bill Inglot and Dan Hersch (1991 DigiPrep).
A nicely thorough collection of Sonny and Cher's classic Atco era, THE BEAT GOES ON covers a lot of ground for a single-disc anthology. Besides the duo's hits, it includes a handful of Sonny's solo singles, most notably the 45 edit of "My Best Friend's Girl is Out of Sight," from his staggeringly weird 1967 solo album INNER VIEWS. None of Cher's solo material is here, which lends a slightly lopsided view of the duo's history.
A handful of their songs, the Spectoresque debut "Baby Don't Go" and their breakout "I Got You Babe" represent the peak of a certain style of commercial folk-pop that was one of the defining sounds of the 1960s. However, it's the lesser-known tracks, like the full-on Phil Spector tribute "It's the Little Things," the waltz-time "A Beautiful Story," and a very odd spoken-word b-side called "Hello," that are the most interesting.