Plasmatics New Hope For The Wretched 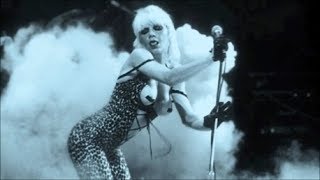 Contains 3 previously unreleased bonus live tracks.
Contains bonus live and studio tracks.
You can't put an exploding car or a television that's been smashed to bits inside a record sleeve, which sums up the problem the Plasmatics had in capturing their appeal on vinyl -- so much of the band's initial reputation was based on their frantic and destructive live show, and divorced from the images, their first album, New Hope for the Wretched, simply had to get by on the band's music, which was a bit of a stretch. As musicians, the Plasmatics were tight and not without imagination; their attack suggests guys who had been playing metal or hard rock who figured this punk rock stuff was going to be the next big thing, but rather than disguise their roots, guitarists Richie Stotts and Wes Beech were more than willing to let their doomstruck metal influences shine through on the instrumental breaks to tunes like "Monkey Suit" and "Concrete Shoes," and parts of New Hope suggest thrash metal arriving a few years early. However, as songwriters Stotts, Beech, and Rod Swenson (the band's manager and idea guy) didn't have all that much to say and not an especially compelling way of saying it. Stylistically, New Hope for the Wretched keeps going around in circles until it finally wears a groove into the floor, and the album's real weak spot is lead singer Wendy O. Williams, who hadn't been singing very long and delivers most of these tunes in a guttural bleat that suggests Stiv Bators with a mouthful of Novocain; she may well have known what to do on-stage, but in the studio her weaknesses were obvious and unavoidable. And while the album's great musical experiment -- the middle section of "Dream Lover," during which the musicians could neither see or hear one another -- may have been an interesting idea, the results suggest a roomful of college freshmen making their first stab at forming a noise band. A bit like Kiss' first three albums, New Hope for the Wretched is the work of a band struggling to make the excitement of their stage show work in the studio and falling short of the mark, though there are a few moments where the Plasmatics manage to get over on sheer sneering energy, one quality the microphones were able to capture. ~ Mark Deming