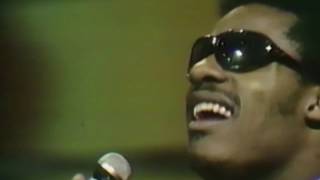 Stevie Wonder - I was made to love her — (Official Music Video)

This is part of ESX Entertainment's Motown Legends series.
Arranger: Stevie Wonder.
In 1961, discovered by Ronnie White of the Miracles, Stevie Wonder was signed by Berry Gordy of Motown Records. His voice broke in 1964 but he re-emerged in 1965 with a worldwide hit, "Uptight (Everything's All right)." His contract expired in 1971 and Wonder financed two experimental albums, playing almost all instruments. He pioneered the synthesizer's use in black music, and addressed racial and spiritual questions. WHERE I'M COMING FROM and MUSIC OF MY MIND put him at the forefront of black music. TALKING BOOK (1972) provided hits with "Superstition" and "You Are The Sunshine Of My Life." INNERVISIONS (1973) consolidated his success while TALKING BOOK gave the hits, "Living For The City" and "Higher Ground." SONGS IN THE KEY OF LIFE (1976), perhaps his most ambitious album, displayed musical virtuosity. The highly successful HOTTER THAN July (1980) included a tribute to Dr. Martin Luther King, "Happy Birthday," and a study in reggae, "Masterblaster (Jamming)." After Stevie Wonder's ORIGINAL MUSIQUARIUM I (1982), Wonder composed THE WOMAN IN RED (1984). It included his biggest-selling single, "I Just Called To Say I Love You." IN SQUARE CIRCLE (1985) and CHARACTERS (1987) returned to accessible melody. Wonder's image as a statesman of black music, and champion of black rights, was boosted by his successful campaign in the 80s to mark the birthday of Dr. Martin Luther King with a national holiday.