Changing the world one prank at a time.

11K ratings
Out of Print: Future availability is unknown
Notify Me When Available
Add to Wishlist
Format:  DVD
item number:  64QDC
Also released as:
The Yes Men for $19
91% recommend us! 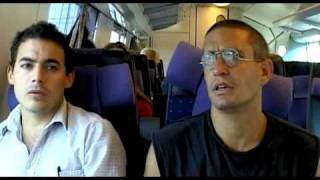 Two average guys who are mistaken for World Trade Organization representatives accept invitations to attend international meetings and make TV appearances on behalf of the U.S. They are the Yes Men, part of a group of comedians and activists who organize harmless pranks to spark political debate. Here, two members of the group, Andy and Mike, embark on several adventures, all of which are caught on film with utter hilarity, and which show viewers some disturbing realities. The film starts when one of the Yes Men's projects, a fake web site called GATT.org that imitates the WTO site, is taken to be real thing. Though the Yes Men's site parodies the concepts of the WTO in an attempt to voice their opposition to its policies, this detail goes overlooked by certain unscrupulous international organizers. For example, the Yes Men respond with glee to an invitation to attend a textile conference in Finland. They quickly go to work designing a costume for their presentation--a skintight gold bodysuit equipped with an inflatable phallus on which is mounted a TV screen. Hilarious footage of the faked presentation and its content--comparing current third-world labor practices to the slave trade--is simply unbelievable. However, the Yes Men's point is made loud and clear when nobody reacts: if you're the WTO, you can get away with anything. Further hijinks ensue, making THE YES MEN a fabulous, funny, and surprising film.