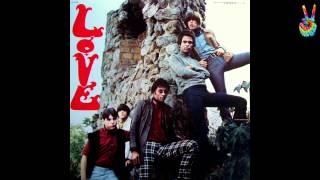 As creative as this group was, Love was never such a strong creator of individual albums. Each record by this band that came out had brilliant songs such as the unforgettable "Seven & Seven Is" as well as second-rate filler including one endless harmonica jam. So this is one group that might be better suited to collections such as this one. A listener might find they have all the Love they need, if such a thing was ever possible, by just owning one album such as this. Other collections are available that don't waste so much paper, however. Whoever designed the interior sleeve of this gatefold album must have thought they were doing graphics for a billboard, but then again these liner notes will be effective for fans of this band whose glasses are broken. The hit singles and main songs that are remembered by this group are here, as are some of the better points from their early albums, although, by a long shot, this doesn't represent all the good material from those sets. The second side dips into later material such as "Good Times" and the pretty "Your Friend and Mine," both of which feature heavier emphasis on lead guitar, contrasting nicely with the campfire folkie vocal ambience Arthur Lee happily insists on bringing into many of these songs. But it is a bit of strain revisiting these songs, as they had only been released a year or two before this set came out. ~ Eugene Chadbourne

19%off
Soundtrack
Lady Bird (Soundtrack From The Motion Picture) (2LPs)
$21.95 on Sale
Add to Cart

54%off
The Peanut Butter Conspiracy
For Children of All Ages - A Golden Classics Ed.
$5.98 on Sale
Add to Cart
(7)