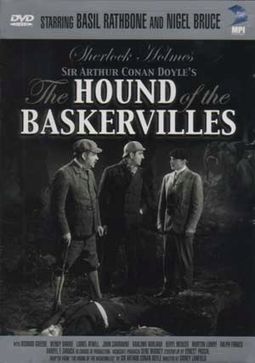 The most celebrated tale of Sir Arthur Conan Doyle's canon, The Hound of the Baskervilles is set in the Victorian Age and was originally released by Twentieth Century-Fox in 1939. It is the first of the fourteen Sherlock Holmes films starring Basil Rathbone and Nigel Bruce.

When Sir Charles Baskerville is killed outside of Baskerville Hall, his good friend Dr. Mortimer (Lionel Atwill) fears that the curse of the Baskervilles has struck once again. Mortimer enlists the help of Sherlock Holmes (Basil Rathbone), before yet another Baskerville can succumb to the evil legend.

Sir Henry Baskerville (Richard Greene) arrives in London to claim his inheritance, Mortimer takes Sir Henry to 221b Baker Street and expresses his fear for Sir Henry's life. Baskerville soon learns that along with the grand mansion on the moor, comes a devlilish curse, a curious butler (John Carradine) and a cast of bizarre neighbors.

Holmes, pressed with "other business," sends Dr. Watson (Nigel Bruce) to accompany Sir Henry to the dreary moor to protect the young Baskerville from the legend of the wicked hound. Of course, with danger afoot, Sherlock Holmes may not be so far from the scene as is assumed.

The first of 14 films pairing Basil Rathbone and Nigel Bruce as the definitive Sherlock Holmes and Dr. Watson, this version of THE HOUND OF THE BASKERVILLES remains the most celebrated adaptation of Sir Arthur Conan Doyle's classic mystery. When his uncle is found murdered on the grounds of the family estate, Sir Henry Baskerville (Richard Greene) arrives from abroad to claim his ancestral home on the fog-shrouded Devonshire moors. But family friend Dr. Mortimer (Lionel Atwill) brings Sir Henry to master sleuth Sherlock Holmes with fears for the young heir's life and tales of a family curse placed upon the Baskerville clan. Together they travel to the desolate Baskerville Hall and encounter a slew of mysterious goings-on, including a suspicious butler (John Carradine) and the ghost of a hound haunting the moors. Dripping with atmosphere, this suspenseful and absorbing film is one of the true gems of the Holmes adaptations.

Is Sir Charles Baskerville's strange death the result of demonic forces and a family curse' Sherlock Holmes searches for a more earthly explanation, when Sir Henry Baskerville receives a death threat upon his arrival from America. In this eerie mystery, hounds are howling on the moors... a killer is on the loose... and Holmes is on the case.

19%off
The Hound of the Baskervilles
$16.20 Super Savings
Add to Cart

19%off
The Private Life of Sherlock Holmes
$16.20 Super Savings
Add to Cart

The Adventures of Sherlock Holmes (DVD)
$19
Add to Cart

16%off
The Many Lives of Sherlock Holmes
$33.40 Super Savings
Add to Cart