TV Shows The Guns of Will Sonnett

Welcome to The Guns of Will Sonnett guide at TV Tome. We search for a man named Jim Sonnett and the tales folks tell may be true; Most call him gunman and killer; He's the son I hardly knew. I raised Jim's boy from the cradle; 'till the day he said to me, "I have to go find my father". And I reckon that's the way it should be. So we ride, Jim's boy and me. The Guns of Will Sonnett was notable for being one of super producer Aaron Spelling's first television series and series star Walter Brennan's (The Real McCoys) last. Despite a lot of promotion by ABC, the series never really caught on with the viewers. After two months of searching for James, the viewers finally got to meet up with the gunslinger in episode 6, even though it would take Will & Jeff another year and a half to finally catch up to the prodigal Sonnett. Although Jason Evers is listed below as a series regular, he was never included in the opening titles but always got the primary Guest Star cr 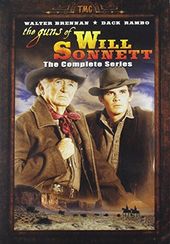